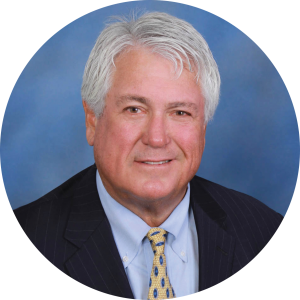 Bill Weathers has served San Bernardino and the surrounding area since 1975 as a personal injury, product liability, and medical malpractice lawyer. With a desire to help people in their most desperate situations, and to offer them relief from their physical and financial burdens, Bill Weathers decided to pursue law school after his undergrad education. During his time at Western State University Law School, he worked as an investigator and law clerk for the predecessor of Peach & Weathers, called Hayton & Peach.

He continued on after law school to work for the Riverside firm, Thompson & Colegate, where he specialized in defending personal injury claims on behalf of insurance companies. However, it was not long until he formed his partnership with Tim Peach in 1985, first in an office in San Bernardino, and then to their current location in Redlands.

Now, the two have maintained their partnership at the Peach & Weathers Law Firm for 35 years. Together, they proudly defend and advocate for the people of Redlands and the surrounding area. Bill Weathers enjoys the intellectual challenge of his job. He loves getting the opportunity to create a compelling case for the benefit of his client. Most recently, the firm accepted a case of a wrongful death involving a trucking company. Though their client was initially blamed and held liable for the accident, the firm was able to prove the inaccuracy of the police report and their client’s innocence with a settlement of 8.62 million dollars. Bill Weathers is proud to bring justice to his clients in these ways, especially in such instances of hardship.

A typical day and average case for Bill Weathers comes with both exciting opportunities and significant challenges. He enjoys the chance to make a meaningful difference in peoples’ lives. His clients often come to him in desperation and the wake of a tragedy. But as their attorney, he has the unique opportunity to ease their particular hardship. However, his role is met with inevitable difficulty, as well. Each day and every case is different, always presenting new challenges in dealing with insurance companies and the inherently slow pace of cases coming to fruition.

No day in the office at Peach & Weathers is quite like the next. However, time is typically spent over litigation hearings, reviewing correspondences and communicating, or making a court appearance.

When Bill Weathers is not fighting to bring justice to his clients, he enjoys spending time with his wife, their four children, and five grandchildren. He is grateful to provide for his loved ones in his role as an attorney while having a meaningful impact on the lives of so many.

Martindale-Hubbell: Peer Rated for the Highest Level of Professional Excellence