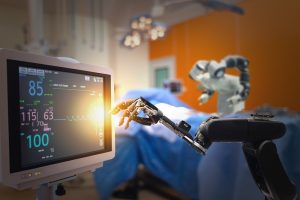 From Wall-E to The Terminator, robots have been imagined in many ways– even attributed personalities with good and evil traits. They are considered revolutionary, futuristic, and perhaps even frightening as they enter into every realm of life. And now, they’ve even taken their place in the operating room. The da Vinci Surgical System, made by Intuitive Surgical and approved by the FDA in 2000, has turned a few heads and received a bit of criticism over the years. And in terms of medical malpractice, we may need to shift our attention to product liability with the increase of medical robots and artificial intelligence.

The da Vinci Surgical System, named after Leonardo da Vinci’s largely anatomically-correct and first human-like robot, is cause for conversation among medical professionals and patients alike. It is designed to facilitate surgery with minimally invasive incisions and maneuvers. While it is controlled by a trained surgeon from a separate console, its four robotic arms conduct the operation. Currently, it is primarily used for prostatectomies, cardiac valve repair, and gynecological surgical procedures. It all seems pretty futuristic, evil genius-like, and perhaps like material for a sci-fi film. However, this joining of refined human expertise and robotic technology has been met with a few complications.

The da Vinci Surgical System has received several points of criticism. And at the going rate of two million dollars, this robot has little room for error. A study published in the Journal of American Medical Association, the side effects, and blood loss in a robotically-performed procedure proved no better than those of a traditionally-performed surgery. The difference was only found in cost. In addition to this lack of explicit benefit, the da Vinci presents two significant flaws.

These flaws have been associated with several injuries and even deaths caused by a mishap during the surgery. And while the da Vinci Surgical System is considered safe, it is being reviewed as more complications arise.

As of 2017, Intuitive Surgical faces over 100 lawsuits in local, state, and federal courts. And as such, medical malpractice now faces a matter of product liability. If you or a loved one has experienced an injury from a da Vinci Surgical Systems procedure, do not hesitate to reach out for legal support. We at Peach and Weathers, serving the Redlands and surrounding area, are prepared to offer legal counsel and advocacy in this time of hardship. Reach out today for compassionate and expert legal assistance.

Martindale-Hubbell: Peer Rated for the Highest Level of Professional Excellence